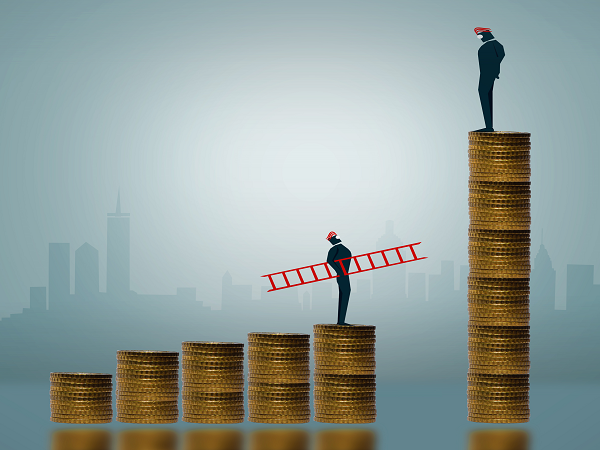 In recent years, analyses of the U.S. charitable giving sector have highlighted the decline of low and middle income donors, and the concurrent rise of high income donors, a trend that mirrors the growing inequalities of income, wealth, and opportunity in society. One of the most widely reported papers came from The Institute for Policy Studies, which in 2016 released Gilded Giving: Top-Heavy Philanthropy in an Age of Extreme Inequality.

In November the Institute revisited the subject in the follow-up report Gilded Giving 2018: Top-Heavy Philanthropy and Its Risks to the Independent Sector. The new paper confirms that the trends highlighted in the earlier report are accelerating, stating that, “Charity has, if anything, become even more top-heavy in the two years since our original report.”

As social inequality grows, and government continues to dismantle an already frayed social safety net, the independent nonprofit sector is increasingly asked to ameliorate the damage. But simultaneously the charitable sector itself is deeply affected by economic trends. The Institute warns that these problems will together create significant risks for fundraising, the independent nonprofit sector, the public, and the health of civil society.

Several key facts discussed in the new report include:

The changes in charitable giving closely track ongoing economic trends in the U.S. While donations have grown 140% over the last 40 years, much of the rise is due to the fact that a pullback of government services has created greater need within society, and consequently more fundraising appeals. The probability is that the charitable sector's transition toward reliance upon wealthy individuals will grow. However, this group of donors often has different incentives for giving than do regular citizens, which is one area where the Institute's study sees potential problems.

An example is in the area of donor-advised funds. As noted above, these have thrived in recent years. However, they do not have payout requirements, which means charitable revenue can be warehoused for years even though donors take tax deductions on their gifts immediately. In addition, if donors give appreciated stock or other investments that turned a profit, its capital gains are excluded from taxation. CharityWatch estimates that the growth of donor-advised funds has delayed an estimated $15 billion in donations to public charities.

One major risk of wealthy donors replacing middle and low income donors is that fundraisers will be tempted to direct their efforts toward elite donor cultivation. Numerous observers of the charitable sector have already commented on this possibility, or even suggested it as a strategy. However the Institute's report cautions that increased reliance on large gifts from mega-donors can lead to fluctuating revenue streams, for example a donor may give a large gift one year, then fail to make a similar sized gift in subsequent years. This would be a problem for budgeting and forecasting future income, and in turn disruptive to communities that foundations have pledged to help.

The increasing power of wealthy donors also raises the risk of mission distortion. Foundations will be tempted to adjust their work to meet the wishes of a large benefactor in order to secure funding. Many elite donors believe they bring added value to solving social problems because of a self-perceived ability to think differently. For these powerful donors, particularly those in the tech industry who tend to think in terms of disruption of norms, giving money to status quo nonprofits is unappealing unless there are shifts in focus areas.

Yet another potential issue is reduced foundation payouts. U.S. law requires foundations to distribute a minimum of 5% of their assets annually. Research by the Foundation Center shows that larger foundations tend to pay out significantly less than smaller foundations each year, much closer to the minimum. As more large donations are funneled into large foundations rather than small foundations or traditional nonprofits, the relative payout going directly to charities is likely to shrink.

Other risks are directed toward the public at large, such as an increasingly unaccountable and undemocratic philanthropic sector, the rise of tax avoidance philanthropy, self-dealing philanthropy, and the increasing use of philanthropy as an extension of power and privilege protection.

The latter risk category is already a serious issue in the United States. Examples include wealthy individuals using donations to higher education institutions to secure legacy admissions for children who would not otherwise qualify to be admitted, foundations in affluent school districts that allow parents to make tax deductible contributions to support their children’s schools, and promotions to nonprofit think tanks that lobby and craft legislation which furthers wealth inequality.

Ultimately, the greatest risks of a top-heavy philanthropic sector, according to the Institute for Policy Studies' report, is that charity may cease to be used a vehicle to benefit society as a whole, but rather will be used as a means to protect and preserve individual private wealth and power, which would exacerbate poverty and inequality rather than alleviating it.

Solutions Envisioned by the Institute

The Institute's report suggests a number of changes in the rules governing philanthropy, among them excluding foundation overhead from payout percentages, linking the excise tax on foundations to payout distribution amounts, establishing a universal charitable deduction to encourage giving by low and middle income givers, and setting a lifetime cap on tax deductible charitable giving.

Prior to the publication of the Institute's data, one of its main recommendations—increasing the minimum annual distribution payout for foundations—had already generated political interest. Legislation was introduced in Congress in 2016 that would have required colleges with large endowments to funnel at least 25% of their endowment income into student aid, but the bill would not have applied to foundations.

The idea of requiring DAFs to distribute donations within a certain timeframe also gained traction in Congress when a five-year maximum distribution limit was proposed, with remaining assets after that subject to a 20% excise tax. That was in 2014 but the issue is still generating concern today. In August Forbes magazine described DAFs as “the thing that ate philanthropy.”

Despite the warnings, no immediate changes seem to be in the offing. The Institute suggests that to fully address the risks of top-heavy philanthropy, reforming the rules of charitable giving is not enough. It also suggests establishing policies to reduce, over time, concentrations of wealth and power in society at large. This would include restoring progressive income and wealth taxation, and closing numerous tax loopholes. Again, no changes along these lines appear to be on the immediate horizon.

In the meantime the philanthropic sector finds itself in a classic catch-22. Seeking larger donors may become increasingly necessary to make up for the loss of median donors, but this in turn may blur lines between no-strings-attached giving and donor control over organizational missions. And it not only has the potential to exacerbate problems of accountability, policy, and democracy within the charitable giving community, but possibly in society as well.