U.S. Charitable Giving Before, During, and After COVID-19 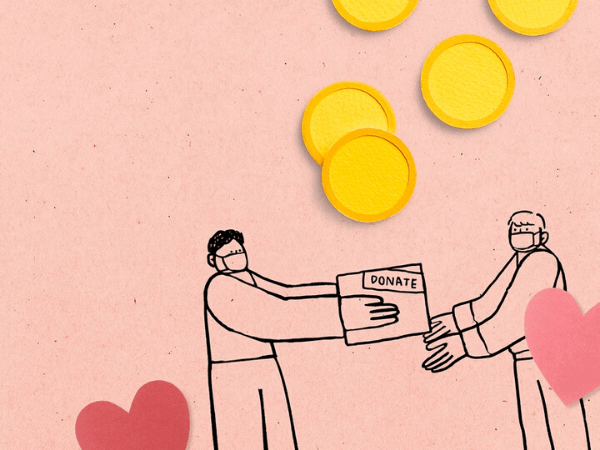 The United States has an unusual system among high-income countries of a limited social safety net combined with tax policy that is supposed to, in theory, encourage high volumes of charitable contributions to fill any holes. It's bred Americans to be generous givers, even if the country's international rankings in social indicators make a strong case that the system doesn't work as well as it might. But whether one is an advocate or critic of the approach, it's the one we have to get us through the coronavirus crisis, which has shaped up to be an unanticipated stress test.

Before the virus
The charitable giving picture was already complex before COVID-19. 2018 had seen the first decline in individual giving for five years, a drop of 3.4% when adjusted for inflation. Foundation and corporate giving managed to offset some of those losses, but since individual giving makes up the majority of charitable dollars, adjusted overall giving was still down 1.7%. As a percentage of the total, individual donations had fallen to 68%, the first time it had dropped below 70% since 1954. There had also been a decline in median small and mid-size donations during recent years.

Fewer Americans were giving to charity by sheer numbers as well. Data compiled by Indiana University’s Lilly Family School of Philanthropy, in partnership with Vanguard Charitable, found a decrease of 20 million donating households in 2016 as compared to 2000. Among households making $100,000 or more, 92% donated in 2017, according to a Gallup survey, but when polled in April, only 87% said they had given within the past year. This is the story leading into the recent period of pandemic, lockdown, layoffs, and increased political unrest.

During the virus
COVID-19 has caused divergent giving trends. Donations from corporations, foundations, and individuals have ballooned, but donations from the subset of small and middle-income households have plummeted. The latter is no surprise. The 2017 Gallup poll revealed that households making $40,000 a year or less claimed to have given to charity at a 73% rate. But Federal Reserve chair Jerome Powell recently revealed that, “Among people who [had been] working in February 2020, almost 40% of those in households making less than $40,000 a year lost a job in March.” As of April, 43% of Americans had reported suffering direct financial harm during the pandemic.

Gallup asked American adults in all fifty states about their current giving. The responses show that the percentage of households earning less than $40,000 that gave to charity within the last year have dropped 17% compared to 2017; the percentage earning between $40,000 and $99,999 that gave dropped 12%; and the percentage earning $100,000 or more that gave dropped 5%. It isn't just cash gifts that have dramatically slowed. Various reports from indicate that some food banks, already used by one in seven Americans before the pandemic, are hampered by a lack of supplies, even as demand doubles and triples in some areas. Blood and organ donations have likewise decreased.

No wonder, then, that calls have been mounting for private foundations to exceed their mandated 5% giving. Many organizations have been reluctant. Some believe that even bigger crises loom that will need far more funding, climate change being the clear example. But as Theodore Schleifer pointed out in a recent Vox article, the stock market boomed during the last decade, and foundations hold far more in their endowments than could have been expected ten years ago—about $1.2 trillion that could make a huge impact during a once-in-a-century pandemic. The average foundation's endowment grew 15% in 2017 alone. Many observers agree that climate change is humanity's most crucial challenge, and believe unseen global emergencies will arise in the future, but also ask if it's wise to wait for a worse crisis to arrive when a terrible one has just walked through the front door.

More than 700 U.S. philanthropic organizations agree with this argument, and have signed a pledge announcing that they will step up their giving to more than 5% this year. This represents much needed funding, but with at least 44,000 private foundations in existence in the U.S., the percentage that have made such pledges is small. Some philanthropists have promised to funnel more money to their foundations, or direct their foundations' giving toward COVID-19, but these are not the same as guarantees for those foundations to give more than the 5% required by law.

Some philanthropists have given cash directly. Amazon founder Jeff Bezos donated $100 million to Feeding America. There have been calls for him to give more. Observers point out that $100 million is less than 0.1% of Bezos's fortune, and that Amazon stock is up 25% this year, partly driven by booming usage during the crisis. Many within the philanthropic community, and elsewhere, ask: Could there be a more appropriate moment for increased COVID-19-related giving than when the virus has been responsible for generating massive profits?

Donor advised funds (DAFs) have also been subject to increased scrutiny. One rationale for the existence of DAFs is that they can ramp up giving at crucial times. So how have they done? The answer is that donations are way up in March and April. According to Pam Norley, president of Fidelity Charitable, March 2020 disbursements outstripped those of March 2019 by 36%. Vanguard president Jane Greenfield also reported sharp rises in grants, 42% in March alone. This is no small uptick, considering DAFs hold assets of more than $30 billion.

After the virus
Assuming COVID-19 is eventually contained, a global economic slump looms. The Bank of England expects Great Britain to experience its worst recession since 1709. For an idea of what the future may hold, a natural match would seem to be the 1918 flu pandemic, but century-old charitable giving data is both minimal and hard to come by. The nearest point of comparison for 2020 is the Great Recession. Obviously, there are differences, but the years 2008 to 2010 may offer some insights simply because of the lived experience associated with that data. How might the next year or two compare to what people in the charitable sector remember from a decade ago?

The numbers on the last recession vary, but a Stanford University study by Rob Reich and Christopher Weimer shows that total charitable giving dropped by an adjusted 7% in 2008. Some data says the drop was as much as 7.2%. In either case, that represented the steepest fall in 52 years, and it decreased by approximately another 3.6% in 2009. Overall, charitable giving declined about 11% between 2008 and 2011. Giving from corporations, foundations, and bequests all dropped over the course of the downturn, according to the study.

Donations from small and middle-income households, which, as noted earlier, were already in decline before COVID-19, look set to take a major hit. American job losses between fall 2008 and February 2010 were 8.8 million, whereas something on the order of 36 million have been lost during the last five months. This suggests dire possibilities, but while there's plenty of agreement among economic analysts that the recession will be deep, opinions are divided about whether it will be long. Some have predicted the shortest downturn on record, while others are sounding less optimistic notes, including predictions of a full-blown depression.

There's a bit of good news. Despite all the lost jobs, Gallup data indicates that about two thirds of Americans—66%—say they won't change the amount of money they give to charity in the coming year. About 25% plan to increase their giving, and only 7% say they'll decrease it. About 40% of upper-income and 23% of middle-income Americans plan to increase their charitable contributions in the next year. However, these are merely promises made to pollsters, and they were made in April. The coronavirus could resurge or linger longer than expected, with knock-on effects throughout the economy and to potential donors' giving plans.

Yet to be measured is the effect from the newly passed Coronavirus Aid, Relief, and Economic Security Act, better known as the CARES Act. The law passed at the end of March and creates new tax benefits for donors to nonprofits. One of those allows taxpayers who do not itemize deductions on their 2020 tax returns to claim an additional deduction for charitable donations of up to $300 per taxpayer, and $600 per married couple. Another piece of the law affects corporations and taxpayers who itemize their deductions by increasing the amount of charitable contributions they can deduct.

Measuring the final impact of the CARES Act on the nonprofit sector, if any, will have to wait until after the next tax season. Several influential analysts have already weighed in, and don't have great expectations, but like so many things right now, it's not possible to be 100% certain just yet. What is certain is that the nonprofit sector has left the before virus era behind. The way things worked then remain relevant in some ways, and there are definitely important lessons to be learned from coping during the virus, but the after virus era is still uncharted territory.