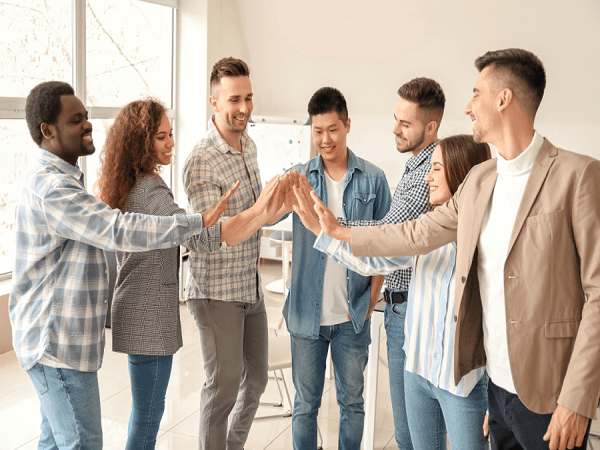 In recent years the nonprofit sector has experienced a much-noted increase in workforce unionizations. This drive toward collective representation parallels those that have been taking place at media outlets and cultural institutions, and comes as analysts increasingly cite low rates of unionization as one of the drivers behind economic inequality. Data recently published by the Economic Policy Institute shows that American workers are losing an astonishing $200 billion in earnings per year due to the collapse of unions.

Support for nonprofit workers wishing to unionize has come from such groups as Service Employees International Union (SEIU); the Office and Professional Employees International Union (OPEIU), which represents 8,000 workers in Maryland, Virginia, and Washington, DC; and the Nonprofit Professional Employees Union (NPEU), which represents 34 workplaces, including the Washington Center for Equitable Growth and the aforementioned Economic Policy Institute.

Such unionizations are a fraught issue for obvious reasons, neatly embodied in the phrase “nonprofit sector.” Some fear that if more money goes to employees the services nonprofits provide are in danger of being curtailed. Low pay, long hours, and putting others before oneself are presumed by most to be features of nonprofit work. However, this view of the sector is incomplete. Many nonprofit organizations are well funded and offer competitive salaries. The number of students graduating from university level nonprofit management programs is growing fast, with an increase of 17% expected between 2019 and 2029. In 2019 more than 175,000 such managers were earning a median salary of $67,000 per year, with the highest decile bringing home $112,000 and up per year.

Numbers vary by methodology, but Johns Hopkins University estimates 12.3 million paid workers comprising the U.S. nonprofit sector as of 2016. With COVID-19 rampant across the U.S. for much of 2020 and still not under control in early 2021, health risks for many nonprofit employees have never been greater. There had already been an upswing in nonprofit unionization activity since the early 2000s, but there was a sharp increase last year—likely coronavirus-fueled. NPEU staged seven successful union drives in April 2020 alone.

COVID-19 highlights the fact that unionization is about more than pay. But it's also about more than healthcare. Newly unionized workers have negotiated anti-discrimination and anti-harassment policies, flexible scheduling, leadership development, remote work policies, DEI (diversity, equity, and inclusion) commitments, and more. Unionization can also result in the improvement or creation of severance packages. The incentive of this last benefit can't be over-emphasized. About 14% of paid nonprofit workers are aged 20 to 30 and are enduring the COVID-19-triggered jobs downturn at the crucial outset of their careers. Around 24% are aged 30 to 40, which means they are experiencing the second catastrophic economic crisis of their adult lives. Perhaps it's no coincidence that the largest increases in unionization today are occurring among workers aged 34 and under.

For nonprofit workers, it can feel dissonant to protect themselves when selflessness often defines their jobs. But union organizers have several convincing tools at their disposal, including simple math—in the U.S. nonunion workers have median weekly earnings 20% lower than unionized workers, according to 2019 data. Organizers also stress that substandard pay and conditions should not prevail in an industry as vitally important to social well-being as the nonprofit sector. Organizers' most useful advantage is often the assurance of approaching a management that has progressive values—or at least an incentive to protect its brand by appearing to be sympathetic to its workers. But whatever their leanings, nonprofits don't have control of their funding the way private corporations do. Reactions to union drives have been decidedly mixed.

When workers at the Washington, DC-based Center on Budget and Policy Priorities unionized in 2018, they asked for the same internal policy the progressive nonprofit advocated for nationally—paid family leave. Before unionization the Center gave only two full weeks of paid parental leave and six weeks of disability benefits. After unionization workers won a pay raise, 12 weeks of paid family leave, and guaranteed cost of living raises. The Center's president capped the negotiations by declaring that both sides had acted in good faith, and both sides were happy with the result. It was the Holy Grail of union drives—deliberations without public rancor, and a united front moving forward.

But union drives don't always resolve with popped corks and cheery toasts. When employees at the progressive nonprofit Wisconsin Voices recently voted for collective bargaining, management did not recognize the union, then restructured the workplace, resulting in terminations. Management said the firings were unrelated to unionization, but workers filed a complaint with the National Labor Relations Board, accusing Wisconsin Voices of retaliation. Many observers voiced support for the fired workers, none more succinctly than Paul Spink, president of the American Federation of State, County and Municipal Employees (AFSCME) in Wisconsin, who stated, “[Progressive organizations] cannot stand for social and economic justice one day, and then cast aside the people who help us achieve success the very next.”

In another example of how employees and management can split, workers at the Animal Legal Defense Fund (ALDF) voted by a supermajority to unionize, which the nonprofit refused to voluntarily recognize. Employees will have to reconfirm their vote before the National Labor Relations Board, but in the meantime ALDF management has hired Ogletree Deakins, a law firm that, according to its website, specializes in representing clients, “confronted with every form of union organizing activity.” Critics say that's legalese for “union busting.” The firm's clients have included such corporations as Ikea, Boeing, and Union Pacific. At the moment neither ALDF staff nor management are backing down, but whatever the outcome, after defending their own interests both sides will then need to somehow move forward with the joint mission of defending the interests of animals.

The same dramas have played out or are ongoing nationwide. At nonprofits such as the National Immigration Law Center and the Congressional Progressive Caucus Center, both new unions received immediate voluntary recognition. But at the Southern Poverty Law Center and the Feminist Majority Foundation, both management groups withheld recognition. Interestingly, new data suggests that even nonprofit workers who don't unionize may reap benefits from unionizations at other organizations. A recent Princeton University study indicated that unions historically have influenced pay even in non-union workplaces, due to employers feeling compelled to provide better wages and conditions in order to prevent unionization.

But how unionizations will affect the nonprofit sector in the long run can't be known. Even in a realm heavily sprinkled with progressive management, history suggests that resistance to unionization will stiffen. Some nonprofits might even be tempted to go on the offensive—though it's uncertain whether the blame game is a winning strategy. In any case, it's important to note that in recent decades employers have been aided by anti-union laws being declared constitutional by the Supreme Court, a macro trend of seemingly unstoppable momentum, considering the remaking of the federal bench over the last four years.

Union battles aren't inevitable for nonprofits. Strategic organizations treat their employees well and strive to minimize the mercenary aspects of for-profit companies. This isn't to imply that nonprofits where unions have formed are poorly run. Finances are not always a matter of preference or want, disagreement over staffing decisions, mission, and method can spiral in unexpected directions, and interpersonal cohesion can never be assured. But overt efforts to treat staff well can go a long way, considering so many workers are there in the first place because they want to do good. This is the most reliable tool nonprofit management has, and it's one that could give lasting results.