The Founding of an Idea 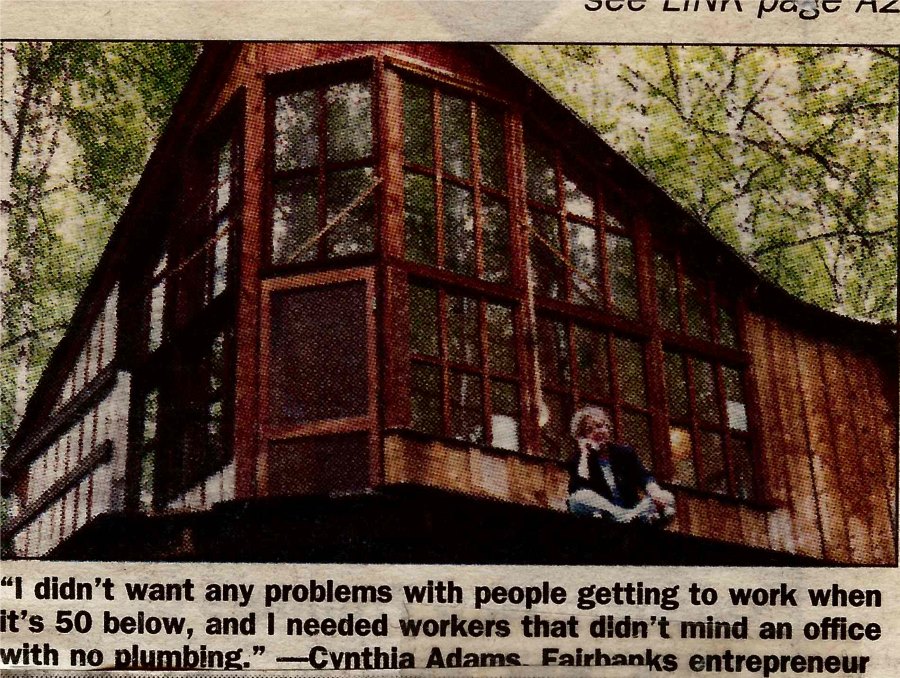 It’s a cold, dark November morning, late 1980s, in Fairbanks, Alaska. I have been thinking for months, maybe years, about how I might have some slight influence on the world. It’s a big thought for a small woman. My time spent helping to develop the economy of this far northern city is clearly drawing to an end. I am eager to move on to a new dream.

That dream finally manifested itself in 1992 as a small business, the Alaska Funding Exchange (AFE), that helps nonprofit organizations, educational institutions, Native organizations, and government agencies in Alaska identify and secure the funding they need to do their good work. In a few months my neighbor, Julie, joined AFE and the two of us set up shop in my small living room in a cabin north of Fairbanks. This work arrangement didn’t last long, as our entire house was less than 1,000 sq. ft. and my teenage son, husband, dog, and seven cats also shared this space.

So Julie and I prowled the neighborhood, dodging wandering moose, and found a little cabin that would do just fine as a work space. It even had oil heat, which is a big plus since it means we didn’t have to chop wood! Even so, when the winter temperatures hit 20 below or colder, we found ourselves wrapping sleeping bags around our legs and wearing wool socks and winter boots inside. But Julie and I were so intent on making this new business work that we barely noticed the cold as we walked from our homes, through the woods, to the cabin each morning.

Not long after we launched AFE, Julie’s sister, Toni, joined us to help with the work load since this little business had really taken off. I was flying to Kotzebue, Arctic Village, Anaktuvuk Pass, St. Mary’s, St. Michaels, Unalaska, Nome, Barrow, and many other places throughout Alaska providing grantwriting training and helping Native villages and numerous nonprofits identify grantmakers that might actually fund their work.

Soon we started publishing a monthly hard copy newsletter full of upcoming grant opportunities, and it immediately became a hit! Julie did all of the research and writing, and Toni edited and did the layout, printing, and mailing. By ‘94 we decided to develop a database, using FileMakerPro, that focused on private funders that give to nonprofits in Alaska. Julie, who had taken on the task of doing all of the research, started to use the Internet to actually do grants research. At that time, just switching from phone calls to emails seemed cutting edge! The next step was launching the Internet component of AFE, making us one of the first businesses on the web in Alaska.

AFE continued to grow over the next few years, filling a need for nonprofits in Alaska eager for education and information about grantseeking. And then, in the mid-90s, the dreaming started again. Julie, Toni, and I wanted to expand our reach by providing easy, affordable access to funder profiles for the nonprofit sector throughout the nation. After months of plotting and planning, the three of us, along with our new partner, Steve, decided to approach angel investors for $750K to $1 million to build out the searchable database that we had created. It was a tough climb.

But in the fall of ‘99 we took a deep breath, sold AFE, and launched GrantStation. And we finally moved the company into town where we had – lo and behold – running water! And parking spaces where we could plug in our electrical cords to keep our car batteries warm and the circulating heaters working. It was quite a switch for these women who had learned to deal with a chilly cabin and an even chillier outhouse.

At first, we were just serving Alaska, Hawaii, Washington, Idaho, and Oregon. But by the fall of 2001 we were offering our services nationally. We worked hard. All four of us. We had a vision of leveling the playing field so that all nonprofit organizations, regardless of size, could have access to the same information and we were intent on making this happen. We had enough investment money to think big – too big, actually. And it took its toll. We had to scale back, and scale back quickly, if we didn’t want to lose the business. Those were hard days – and included many sleepless nights for all four of us.

And the challenges didn’t stop there. Over the next five years we still had many hurdles to jump, but we had taken the seed of an idea on a dark, cold morning in November and nurtured it into a real business. Little did we know that the hurdles we initially jumped were the easy ones!

I’ll be sharing more about those early years, including our strategy for selecting the funders profiled in our searchable databases, with you in my next blog post as part of celebrating GrantStation’s 20th anniversary.