Jen Pendleton is a self-described board governance “nerd” who believes sound leadership and strong organizational culture are keys to nonprofit success. At Aly Sterling Philanthropy, Jen anchors the Indianapolis office and has expanded the firm’s relationships with nonprofit leaders and community foundations around the state. Before coming to ASP, Jen served as president and CEO of the Community Foundation of Boone County (Indiana), where she led a campaign to raise $1 million in matching funds from the Lilly Endowment for the county’s Community Impact Fund. Prior to Boone County, Jen served as executive director of Kappa Alpha Theta Foundation, a $30 million national education foundation in Indianapolis. There she worked with board and staff to successfully launch the organization’s first major campaign in decades. She spent ten years at Riley Children’s Foundation, also in Indianapolis, in a variety of roles including major gift officer and director of the hospital’s telethon and events department. 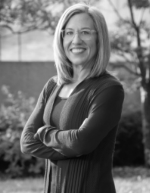